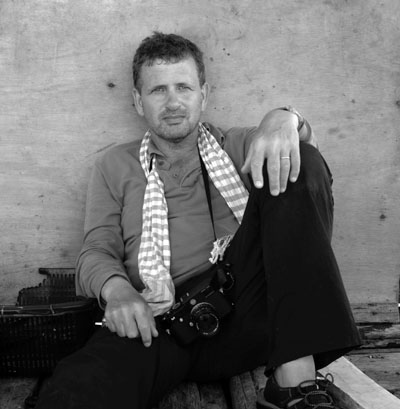 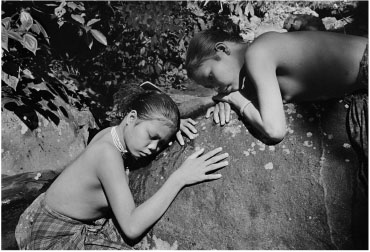 Pierre de Vallombreuse was born in Bayonne in 1962. Having met the novelist and international reporter Joseph Kessel, a friend of his parents’, he felt the need to bear witness to his times very early on.

In 1984, he entered the Ecole Nationale Supérieure des Arts Décoratifs in Paris, with the aim of becoming a press illustrator. However, the following year, a trip to Borneo, during which he lived with the Palawan people, the last jungle nomads, radically changed the course of his life.

The sedentary artist became a nomadic observer, and photography became his means of expression. While still a student at the Arts Décoratifs in Paris, he repeatedly made long trips to the Philippines jungle with the Palawan people. He spent a total of over four years living with them.

A first part of his work on the Palawan people was presented at the photo festival Les Rencontres Internationales de la Photographie d’Arles in 1988.

Pierre de Vallombreuse was secretary general of the Association Anthropologie et Photographie (Paris VII university), created by Edgar Morin, Emmanuel Garrigues, and Jean Malaurie. He published over a dozen books and exhibited his work in festivals, museums and galleries.

Pierre de Vallombreuse unveils the complex reality of the way of life of these weakened peoples whose heritage is essential for us. He fights for their respect and their fair representation.

His work is like a wake-up call. It is structured around vast projects that are carried out over many years: Peuples, Hommes racines, Souverains, Badjao – une disparition silencieuse, La Vallée, W. Project USA. Their aim is to alert the public about the fate of these populations, for far from the primitive, exotic and archaic reality conveyed about them, the reality that he shows us through photography is quite different: it’s a fight for their survival.

These populations are indeed way too often the primary victims of genocides, war, racist ideologies, economic predation, food shortages and environmental disasters.
These are crucial issues which, rather than being limited to these faraway territories, pertain to our humanity.

Over 30 years, Pierre de Vallombreuse has constituted a unique photographic collection of 130 000 photographs of 43 indigenous groups the world over, which honours cultural diversity and reveals these peoples’ realities.

The people of the valley, chapter 1:

The Hadzabes of Tanzania, a suffering people:

The Inuit of Greenland, towards independence:

The people of the roots:

The Hadzabes of Tanzania, a suffering people:

The Inuit of Greenland, towards independence:

Perspectives on the Americas:

The hard life of Tulibac, a film by Pierre de Vallombreuse on the people of Palawan produced by Canal + and the BBC received 3 prizes:

The Hard Life of Tulibac , a film by Pierre de Vallombreuse about the people of Palawan. Produced by Canal+ and the BBC.