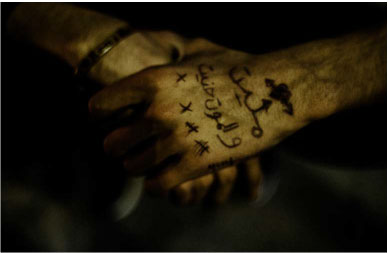 Céline Croze was born in Casablanca (Morocco) in 1982. She studied in France, where she got a master’s degree in Performing Arts, then specialised in visual media at the ESEC and at the EICTV in Cuba.

Parallel to her work on feature films, she developed many photo and video projects.

She notably participated in the workshops organised by the Void gallery with Antoine Agata and Akina publishing house with Kladvij Sluban.

Céline Croze is sensitive to the flaws in our society. She uses cinematographic codes to show a story, to transgress the world around her and immerse herself into the flaws of those she looks at.

Each photographic project resembles a human story. The dark and grainy landscapes, the underlit human bodies or the slightly uncomfortable close-ups are the result of instinctive decisions. When she takes pictures, Céline follows her animal instinct, on the brink of urgency and danger. Her images capture moment residues, they try to feel human flesh and trace the faces of wounds or of violence. For each project, Céline Croze wishes to get as close as possible to capture the atmosphere of a given moment.

For Céline Croze, a photographic series can be triggered by the slightest observation, the slightest piece of writing or encounter. For “Les Purs” (the pure ones), she was inspired by a recurring dream in which she felt surrounded by water and in danger. In the case of Nothing Happened, the visual story was associated with two touching poems.

By calling her series SQEVNV, Céline pays tribute to a young boy she met on a rooftop. She remembers these words that remain etched in her memory: “Siempre que estemos vivos nos veremos”, As long as we are alive, we will see each other.

Her mystical photography, inspired by moving images and the aesthetics of cinema, introduces the viewer into a hidden world, beyond that which can be seen or experienced.

Her various works as a photographer and videographer were presented at the Fès Rencontres Internationales de la Photographie, at the Casablanca Billboard Festival, at the Marrakesh and Paraguay Biennales, at Kassel festival, at the Fuam in Istanbul and at the Tangers Photography Foundation.

In 2019 Céline Croze won the Cadaqués festival with SQEVNV. In 2020, she was selected from amongst 100 emerging European photographers by Gup magazine and Fresh Eyes Photo Talent 2020 (book published in July 2020).

That same year, she received the revelation prize at the MAP festival and the Face à la Mer festival with the same series. She also received the Mentor prize for her Mala Madre project.

“Nothing Happened” was exhibited in April 2021 at the Rencontres de la Jeune Photographie Internationale in Niort (Villa Perochon). She was also selected by Claudio Composti for the Oscar Barnack Leica, and she was one of the winners of the Tremplin Jeunes Talents at Festival Planches Contact in Deauville in 2021.

That same year, she was also a finalist for the HSBC 2021 prize for “SQEVNV” and exhibited it in April at the Instantes Festival in Portugal.

In June 2022 she will exhibit SQEVNV ‘Siempre que estemos vivos nos veremos’ (As long as we are alive, we will see each other) at the Sit Down Gallery.

“It always starts with a story. Slipping into the crack. Erasing oneself and tapping into world time. There’s this animal impulse which borders on urgency and cradles danger. Harvesting the residues of action, touching the Human, tracing the faces of wounds or violence, getting as close as possible and merely extracting the raw material. There’s imminence, the body in its territory, immersion into faraway and unknown times that are knocking on our door.

I extract a vision of the hidden world from my experience in film and fiction writing, beyond the limits of what we live and see.”

2013 – International Meetings of Photography in Fez

2019 – Winner of the In Cadaquès Festival with her series “SQVNV”

2021 – Winner of the Springboard for Young Talents at the Planches Contact Festival, Deauville